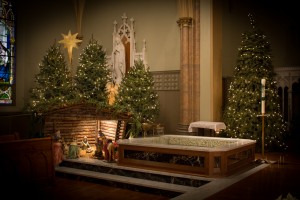 Arts and Environment reflect our recognition of the wonder of the Lord’s real presence in our midst.

This ministry honors our sacred space and enhances our liturgical experiences through seasonal planning and decorating of the church, creating visual effects and maintaining the physical interior of the church. Participation may include a one time project or an ongoing interest reflecting your personal talents.

Flowers should draw us into worship

The Catholic Church has a long history of bringing nature inside the worship space, according to Andrew Casad, director of the archdiocese’s Liturgy Office.

“Some of our very, very earliest churches, places like St. Peter’s and Sts. Cosmas and Damian were built on top of the tombs of those particular saints,” Casad said. “It’s part of what we do … we place beautiful things on the graves of people.”

In the Christian tradition, there quickly grew to be an association between liturgical seasons and the local flowers coming into bloom at that time, he said. And there’s a classic tradition of the sexton, or sacristan, growing flowers to adorn the altar.

When adding flowers to the worship space, “noble simplicity” should be the aim, Casad said.

“We adorn the key parts of the church itself — near the altar, near the ambo, the paschal candle, the baptismal font — to bring attention to the things that are already important,” he explained. “The
flower arrangements are meant to draw us into the worship itself.”

And the scent of flowers adds to the “multilayered, sensual, sacramental dimension of being Catholic,” Casad said. “My scientist wife would remind me that for most of us, most of our deepest memories are triggered by smell.”

Except for Lent, when the church says the worship space should be devoid of flowers, local custom guides the use of natural materials, Casad said. “There’s no rule: ‘Thou must not import African violets. Thou shalt use trilliums.’”

I want to help prepare our sacred space for Liturgy