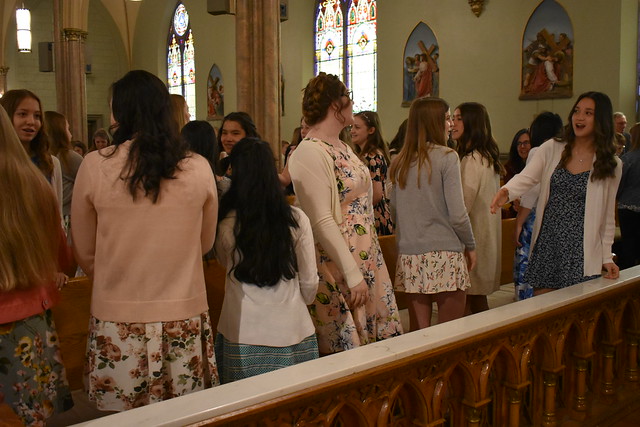 We prayed together on May 2, 2019 at Saint Patrick Catholic Church and celebrate May Crowning with an all school Mass and feasted on hope as Mary did.

May Crowning is a traditional Roman Catholic ritual held during the month of May.  It is a solemn procession at the close of the procession a statue of the Blessed Virgin is crowned with a garland or crown of flowers honoring Mary as “the Queen of May.”

There is a special honor attached to being chosen to crown the statue of the Blessed Mother. Saint Patrick Catholic School 8th grader Madlyn K. led the procession and crowned Mary with fellow 8th grade classmates Roma S. and Kiera S. as her attendants. The processional included students from each grade level carrying flowers for Mary. Lillian C., Mary M., and Gabrielle Q., also 8th graders, had the honor of special readings and leading prayers.

PreK students at has the honor of adorning the Blessed Mother statue at Saint Patrick Catholic School.

In 2018, the Vatican announced Pope Francis’ decision that the Church celebrate the Blessed Virgin Mary in her role as “Mother of the Church” every year on the Monday after Pentecost.